New Mercedes SL the revival of an icon 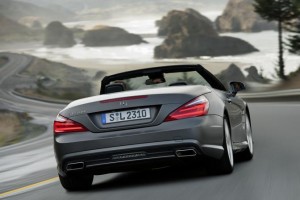 MILAN-With a name like that can not afford the slightest mistake. The MercedesSL, in fact, is a direct descendant of what was perhaps the most elegant cars of theStar, the “Gullwing” now proposed in a supercar with the SLS AMG. More than justpower, the new coupe-cabrio (debut in January at the Detroit Motor Show) is anelegance of its strengths, its better to emphasize the genetic differences between the two cars.

Dieted-generational change in the technical innovations are prominent: body and chassis are made of aluminum, a choice that has saved 140 kilograms. So to reduce consumption. Also all new steering and suspension, with the possibility of having the electronic control buoyancy. Two engines are available, at least initially:at the top of the 4.6-liter V8 from 435 hp declaring a torque of 700 Nm, the V63.5-liter, 360 hp (350 Nm), both Abbinante automatic transmission 7G-TRONICPLUS. And the performances are super: just 4.6 seconds to accelerate from 0 to100 for the SL 500 (the most powerful), while the other uses it with the six-cylinder5.9.

ROOF “MAGIC” – grew in size than the current generation, the new Mercedes SL is longer than 5 inches wider and offers more space to those who sit in front. Aboundin references to the chrome and sporting tradition, and there is also the “Magic SkyControl”, a device already introduced on the SLK, which allows you to automatically vary the intensity of light in the cockpit that filters through the glass roof. Roof to fold into a compartment in the trunk takes a few seconds. Prices are expected to remain on the current SL 88 000 euros.