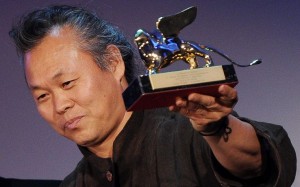 We can say without fear of contradiction: the Golden Lion awarded to Mercy by Kim Ki-duk is a well-deserved recognition went to a director who has long been an author in full. Witness the unanimous applause that greeted the announcement of the award as well as the reviews that the film had been published as a result of its projection. It is heartbreaking and cruel work that has seen him return to directing after a deep depression crisis. A crisis witnessed by the autobiographical documentary shot in an isolation that bordered on madness and presented last year at Cannes. Not everyone will understand the meaning of that song sung on the stage of the Great Hall. You Arirang which lent its title to that confession in open heart and coincides with a search of inner peace that is what the director wished all.
A jury that centers the First Prize is already showing to be sensitive, but the group of experts led by Michael Mannha proved this attention on several fronts. If the prize went to Ulrich Seidl for Paradies: Glaube can find supporters and detractors same can not be said for Paul Thomas Anderson, who won the award for Best Director for The Master also receiving a major consideration for the choice of the two protagonists. Because his film, which has the background, the birth of Scientology, is based on the evidence of two extraordinary actors Joaquin Phoenix and Philip Seymour Hoffman that compare favorably without exaggerating but also unleashing all their acting skills. In terms of acting two awards have finished with the approach ideally. Why the Volpi Cup for Best Actress and the Mastroianni Prize for best emerging actor went to two young men: the Israeli Hadas Yaron and Italian Fabrizio Falco. The first gave an intense participation in a story that touches the difficult issue of religious orthodoxy in relation to individual choices in the movie Fill the Void. Fabrizio Falco instead filled the screen with two totally different roles moving from passive boy was the son of Daniel Ciprì to focus on a character expressive tension in Sleeping Beauty by Marco Bellocchio. Ciprì has also seen honor of recognition for the technical quality of a film that reconstructs Palermo in Puglia and best screenplay attributed to ‘the way we were’ postsessantottino Olivier Assayas Apres Never seems more related to the presence on the jury of the cast not to extraordinary merits of writing. On the whole, it should be noted that this 69 ^ Show proved up to the task and Alberto Barbera has taken (with a great sense of proportion and attention to the overall quality of the event) the work was interrupted years ago.

Also on this Venice One Limouisne was present. The service was excellent: transfer from the airport to the city of Venice lagoon with maximum comfort and safety, performed by professional drivers and capable. Venice One Limousine is the best choice for the live event of the Venice Film Festival.